Bendigo Tramways has been in operation since June 1890. From that time, the citizens of Bendigo have experienced battery, steam and electric traction as the principal modes of propulsion for their trams.

The Sandhurst and Electric Tramway Company was the first to blaze a trail when it introduced battery trams to Bendigo in June 1890. Unfortunately they had made a serious miscalculation, as the batteries quickly proved inadequate for the hilly terrain of Bendigo. After a couple of months battery trams ceased running and were later replaced by steam trams in February 1892. Steam trams were a reliable means of transport and successfully moved Bendigonians around for ten years, but the onset of the recession forced the Bendigo Tramways Company to sell up in 1899 to the Electric Supply Company of Victoria (ESCo) who continued to run steam trams until 1902.

This turn-of-the-century sale led to the introduction of electric trams to Bendigo in April 1903. These were a success from the very beginning. During peak hour people would be standing in the aisles, in the doorways, even on the running boards on the outside of the tram. In addition, the trams were also the first option for deliveries. Parcels, newspapers, movie reels for the picture theatres and even mail bags found their way onto the trams; sent from outlying post offices to the GPO in the city centre.

At the end of World War I the Victorian Government constituted the new semi-government instrumentality, the State Electricity Commission of Victoria (SEC). The SEC was to take over all privately owned power generating companies in Victoria and operate as a state owned monopoly ... Bendigo's tramway system was an integral part of the deal.

The outbreak of World War II was a testing time. Revenue and passenger numbers were declining as automobiles became more popular. Additionally, shortages in manpower and materials due to wartime economies caused difficulties. As a result, the SEC made several attempts at closing the tramways and handing over the passenger services to private bus operators. It took some time, but in July 1970 the Victorian Parliament finally granted the SEC's application for abandonment of the tramways.

April 1972 marked the closure of the Bendigo Tramways as a commuter service and an estimated 20,000 people gathered to say an emotional farewell.

Saving Bendigo's trams
Despite the seeming practicality of a shift to private buses, the idea of trams vanishing from Bendigo's streets did not sit easily with the community. Many felt that the legacy of the past was being squandered, and the newly formed Bendigo Trust was called upon to present a submission to the Bendigo City Council suggesting that a two year trial for a tourist tramway be undertaken. The Bendigo Trust's persistence was rewarded in September 1972 when the Victorian Cabinet announced that it had approved the two year trial.

However, in the lead up to the closure of the Bendigo Tramways (1970-72), tram museums and individuals had been making representations to acquire some of Bendigo's trams for their own collections. For instance, the SEC had allocated Birney No. 29 to the Australian Electric Tramways Museum (AETM) located in Adelaide.

The Bendigo Trust knew nothing of the promises made to the AETM. So, when it came to light that the AETM were on their way to fetch Birney No. 29 in October 1972, they had no idea of the uproar their activities were about to unleash, as questions were raised as to who actually had the rights to Bendigo's trams? It was felt that if one tram was to leave Bendigo, the flood gates would open.

As word spread that "Somebody was trying to 'pinch' a Birney", Bendigo Trust Board Directors and Tramways volunteers took extreme measures to ensure that the Birney stayed in Bendigo: it was pushed back inside the Depot shed, iron pipes were welded onto the rails in front of the tram and the carbon brushes from the motors were removed to make the tram inoperable. When Bendigo's Mayor Cr. Joe Pearce heard about the plan, he also jumped into action and enlisted the help of the media, calling for citizens to rally at the depot and form a blockade. The response was phenomenal with local business owners directing their staff to take company cars and block the depot yard. In the end, the tram could not be moved. Subsequently, a ministerial committee was set up to re-examine the use and distribution of Bendigo's trams, which culminated in the entire fleet being sold to The Bendigo Trust for a mere $1.

It is important to note that retaining Bendigo's trams was by no means an uncontested act. While there was strong support in favour of introducing a "tourist service" there were others, such as a local progress association, who wrote to the Bendigo Advertiser saying that the idea was "childish and impractical", as it would prevent the building of a four lane highway through Bendigo ... "We want real progress, not sentimental stupidity blocking up the centre of the city". One has to wonder if their opinions have changed since then? Regardless, the ample community support for the trams has seen to it that 42 years later, the Vintage Talking Tram service is still in operation.

Bendigo Tramways: 1972 – Present
No other Australian city which closed its tramway system left track, trams and a depot behind in the manner that Bendigo did and this enables us to create a picture of the past for our visitors. Whether enjoying a Vintage Talking Tram Tour or taking our guided Depot and Workshop tour, a visit to Bendigo Tramways drives home the significance of how Bendigo has developed as a city, and the role Bendigo Tramways has played in that development.

Over the years, we have even attracted such dignitaries as HRH Prince Charles, who visited Bendigo in 1974 and took Bendigo Birney Tram No. 30 for a drive.

Today, Bendigo Tramways is Australasia's largest tourist tramway and welcomes over 40,000 visitors annually. The Bendigo Tramways Depot is the oldest operating tram depot in Australia and is listed on the Victorian Heritage Register. We currently have 45 trams in our fleet (13 of which operate as part of the 'Talking' Tram service).

We have an on-site Archiving Department whose sole mission is to preserve and catalogue thousands of tramways documents, photos, mechanical plans and artefacts. This not only ensures that the information we convey to our visitors is historically accurate, but it also ensures that the information and artefacts, which create a direct link to our heritage, are protected and available for future generations.

Our strength is in our people and many of our visitors' final comments about their experience refer to how much they enjoyed the company and passion of our staff. 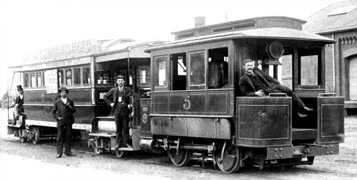 Baldwin steam motor No.5 and bogie trailer No.4 in Railway Place. Circa 1893. 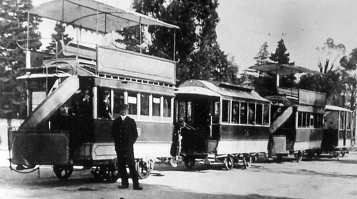 Electric trailer cars No. 9 and 14, an ex horse car, and No. 13 at the Bendigo Railway Station. 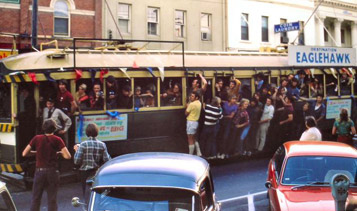 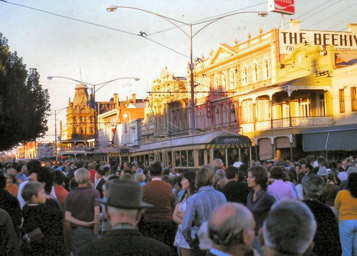 April 1972 marked the closure of the Bendigo Tramways as a commuter service. An estimated 20,000 people gathered to say an emotional farewell.