Discover the traditions of Bendigo's first people and hear a story more than 40,000 years in the making

For thousands of years, the Bendigo region has been the home of the Dja Dja Wurrung People. For them, Country is more than just the landscape – it is a living entity which holds the stories of creation and histories that cannot be erased.

Join us for a journey of discovery into the unique and fascinating traditions of the Dja Dja Wurrung and hear a story more than 40,000 years in the making.

This tram has been adorned inside and out with striking Aboriginal artworks created by emerging Dja Dja Wurrung artist, Natasha Carter. A special commentary has been written and narrated by the Dja Dja Wurrung Clans Aboriginal staff and members and was produced by prominent musician and composer David Bridie.

The Dja Dja Wurrung Tram has been made possible thanks to a number of sponsors who have generously contributed to the project, these include: 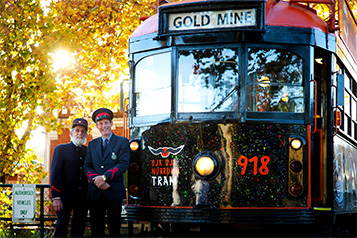